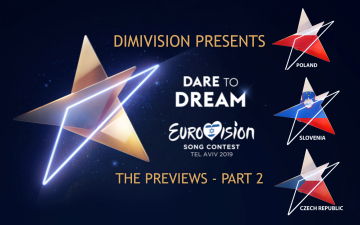 The tide is high, so hold on and fasten your shitbelts for part two!

The Song: Eum, what the hell did I just witness? The intro to their bio on Eurovision.tv is hysterical by the way, including “Tulia was formed out of encouragement from fans of the unique style of their cover of Depeche Mode’s Enjoy The Silence”, many of whom were wiping tears from their eyes in amazement.” I’m wiping my tears as well, but not quite for the same reason. This is…how shall I put this…excruciating to sit through. It sounds like it could have been recorded in the fifties in the outskirts of Poland. That is not an insult of any kind, simply a reference to how very non-contemporary this sounds. The switch to English is completely redundant, everything sounds the same.

Standout line: “Love me now! Love me now! Harder and harder” Doesn’t sound all that traditional…

The Voice: The bio further includes “These young but experienced artists sing a unique style of Polish folk called ‘śpiewokrzyk’, which means ‘white voice’ or ‘screaming sing’.” White noise, in other words. Or simply screaming. Either way, they sound like angry smurfs.

The Performance: Probably along the lines of the traditional references we got in the video and other performances. They could be related to the Russian Baboesjkas from 2012 for all we know. Probably fits the vibe in Poland right now, but come on…

In one line: Get your earplugs out and lock your dog somewhere safe.
PERSONAL TOTAL:

Will it qualify? Much as I wish for this to stay in the semi, I’m quite afraid this’ll somehow grab the silly vote. Even if it is far from silly.

The Song: Probably the oddest of experiences on offer, which is saying something in this semi. It could easily come across as boring but it’s got this soft, enchanting charm and glow around it that really makes it quite captivating. The lyrics are rather wonderful and even if  you can’t instantly get them, the vibe translates them ever so well.

Standout line: “Eternity and this planet aren’t friends” Poetic charm, much like the rest of the lyrics.

The Voice: Soft, almost whispering, understated but still beautiful and quite powerful – it’s a bit of an odd mix but it somehow works wonders.

The Performance: Suits the song to a T and only adds to the otherworldly vibe we get from the song and vocals. I imagine they won’t change much come Tel Aviv, except for some camera angles, and I should hope so. It’s almost Japanese in its seeming lack of emotion but then it’s so soft that it becomes really quite magical.

Will it qualify? This’ll be either completely ignored or it will soar like no Slovenian entry has ever soared before. I’m banking on the latter. Literally, I’ve got them on 50/1 to win the entire thing.

The Song: First things first: the rhythm in the chorus is superb and very reminiscent of the sound of the not so popular slash well known band Chromeo. It really makes me want to move every time I hear it. Pity that the verses lag behind, and they’re not helped by the quite confusing lyrics that don’t seem to match the rest of the song. It’s a nice radio-friendly song but it might stop and start one too many times to really come across well on stage.

Standout line: “You said you wish they weren’t taking such a long time” Jealous much?

The Voice: OK-ish. That live performance in Ukraine wasn’t as bad as one might’ve feared from hearing the studio version, but it’s not really very engaging either. Which, combined with the doubts I conveyed above, might leave a bit of an invisible impression.

The Performance: Here’s hoping the actual performance will be less laidback than the video and that live performance in Ukraine. In my not so humble opinion they should go really graphical, think of the awesome videos by OK GO! Check them out on Youtube, they’re really something. If Lake Malawi (I’m not even gonna comment on that band name) don’t find anything that sticks out visually, they’re gonna be (not so alone) in the danger zone.

In one line: Don’t send me a friend request, just follow me on Insta, mkay?
PERSONAL TOTAL:

Will it qualify? Borderline. It’ll all depend on how it comes across live. For now I’m getting Switzerland 2009 vibes: nice enough, but not enough.