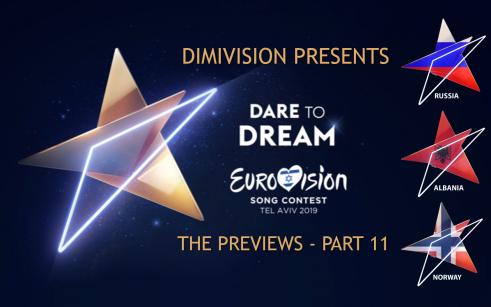 The Song: Hands up if you expected something up-tempo and even more of a banger than his 2016 entry! Everyone? Good, thanks. This dramatic ballad is quite the surprising choice, especially for Sergey’s voice. Looking at who composed it, it’s not that surprising that the drama is strong within this one though. Even after a couple of listens I’m still not quite sure whether I like it – it’s all a bit too on the nose for me. But as far as ballads go it’s one of the better ones on offer this year, that’s for sure. Loving the tempo switch in the last 30 seconds when the choir joins him, that’ll surely come across rather impressive on stage.

Standout line: “Acid rain from your finger prints” I could say something about the combo of ‘my throat is on fire’ and ‘I will swallow hard’ but this is ever so slightly more WTF-ish.

The Voice: As stated above, I’m not too fond of Sergey’s color of voice and that’s a bit of a shame as it’s so clearly on display here. He’s a great singer, we know that already, so I suspect this’ll come across rather well. Even with the misleading accent here and there (see: heating/hitting the walls of my heart).

The Performance: So, not only the composition but also the video are clearly Game of Thrones inspired (or am I stuck in a tunnel vision right now?). Curious how they’ll want to translate this onstage. Keeping his 2016 performance in mind, I’m expecting something rather grand.

In one line: Do you like scary movies, Sergey?
PERSONAL TOTAL:

WILL IT QUALIFY? Of course. And it will score big time on Saturday. But it won’t win. Sorry ‘bout it, Sergey.

The Song: Quintessential Albanian, I’d say. Dramatic, difficult to access and yet slightly hypnotizing and enigmatic. Loving the drumbeat throughout the song, one of the catchier lead motives in the year’s Contest. But it’s all ever so slightly hard to digest… It’s a bit of a mystery why this comes in the line-up right behind Russia, by the way – I don’t feel like they necessarily enforce each other, and I do wonder what the actual impact will be.

Standout line: “So much nostalgia, so little hope” which describes pretty much all of the Albanian entries at Eurovision.

The Voice: Quintessential Albanian, I’d say. One could say they have excellent wailing women over there, and one would mean that in the most positive way possible. If possible. It’s just not exactly a sound that is common to Western European ears, so it’s pretty difficult to guesstimate how this’ll come across.

The Performance: Quintessential Albanian, I’d say. Not really, that was just for comedic effect. The NF performance wàs, but the preview video promises something completely different – even though the ‘to be continued at Eurovision’ at the end of it is a bit redundant, cause really: who will have seen it?

WILL IT QUALIFY? Haven’t got a clue. Will Europe be in the mood for something heavy on the stomach? And will the Russian entry coming right before it cast a shadow over it, or rather be a positive trigger?

The Song: Probably the most Eurovision thing on offer, together with Australia. This is the kind of song that pops to mind for non-fans when they think about Eurovision and it tick many boxes. The thing that makes it work however is that KeiiNO doesn’t hide the clichés at all, but makes them work for them and it’s delicious. The harmonies, the build-up, the lyrics: it’s all just a bit too far and it’s just great. Loving the electronic vibe they gave the chorus and loving the way it all comes together in the last 30 seconds, a great cherry on top. Not that keen on the Joik-intervention/bridge, but it does get woven back into the song in a clever way so it’s at least more digestible than other Joik-attempts (like, say, Norway 1980 *coughs*). In short: it’s kinda trashy, but it’s awesome trash.

Standout line: “Cause I am dancing with the fairies now” *insert obvious comment here*

The Voice: Great stuff here. The mix of the three voices works, they each get enough screen time and the balance is strong. The Joik could be a tad more impactful, but perhaps I’ve grown too used to it by now to even say something remotely meaningful about it. Curious to hear this completely live though, as in with full backing vocals.

In one line: Spirit in the sky – is this another Mufasa-reference?
PERSONAL TOTAL:

WILL IT QUALIFY? I can’t see this getting stuck in the semi, to be honest. Don’t know whether it will obliterate the competition like it did in MGP though. But perhaps people just might need something that sounds familiar instead of completely out there.