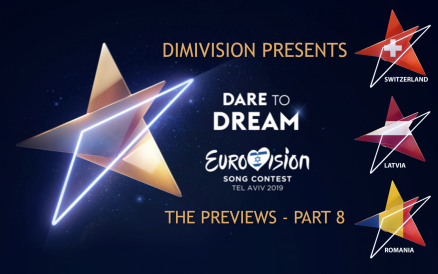 Are you having the time of your life? Did you carry a watermelon? Does anybody put this baby in a corner? OK, enough with the Dirty Dancing references already – Time for part eight of the previews!

4. SWITZERLAND – Luca Hänni – She Got Me

The Song: So. Yeah. Apparently everyone thinks this is going to do very well. Well… I guess I can kinda see why: it kinda picks up where Fuego left off, and it’s referencing Dirty Dancing which will melt women’s hearts (and a good part of the gay ones, I bet) all around the globe – or at least the Western Europe part of it. But it sounds very Mendez (the Melodifestivalen one) to my ears: schlager-latin, neither fish nor flesh and the ‘so low’ parts are annoying AF. To some this might be the start or heart of the fiesta, to me it’s something that could pop up in one of my Zumba classes: I’d only move cause it’s part of the fixed set.

The Voice: He won the German Idol, he won lots of awards – I’m sure this guy won’t slip up. It’s not like the song is that demanding anyway. Curious to see what the results of the combo of singing and Dirty Dancing will be however.

The Performance: Sure hope Mendez isn’t a reference when it comes to the performance because this could end up being dated before you can say “did you know Dirty Dancing got released over 30 years ago”? But the video is promising, and boy Luca sure is a feast for the eyes. Not only as a piece of eye candy, I bet mr. Hänni could bottle up that self-confidence and sell it for quite a few bucks.

WILL IT QUALIFY? I guess I’m gonna have to follow the masses on this one. I’m not feelin’ it, but a spot in the final isn’t unimaginable. Will it really do as well as everyone seems to think it will though?

The Song: Small and almost invisible as it might seem to some (most) in the fan community, this is one of those that I instantly adored. So of course it will be utterly chanceless. Its Dansevise-vibes (copyright one of the besties) swept me away immediately and I’ve been playing and singing it ever since it got selected. I love the mellow vibe, as if it’s played in a  loungy bar somewhere downtown. I could have done with a slightly more exciting build-up, less repetition of the two main lines or something to give it just that little extra to make it stand out more. But *insert heart eyed emoji*

Standout line: “I travelled through the time, it felt for me like doing a crime” This insipid rhyme is the only stain on the lovely lyrics – why can’t time for once rhyme (oh, look, haha!) with mime, climb, chime, sublime or even slime? (This comment is not sponsored by Rhymezone.com)

The Voice: The husky tones of singer Sabine feel like a warm blanket, though it feels like she sings with too much air at times. She sells the lyrics well, if a tad too modest.

The Performance: Loving the understated NF performance…but it gets just a little same-y after two minutes. The casual band set-up works, and the close-ups do what they need to do. The working point here is Sabine’s flirting (or lack thereof) with the camera. A bit more involvement would do this a world of good.

WILL IT QUALIFY?  It could charm people. I hope it does. I fear it won’t though.

The Song: Angry woman alert! I am naturally inclined to love this, with its weird structure, dark brooding electronic vibe and assertive nature. The build-up however is never really clever, the stop and reset midway through simply interrupts the flow and it’s a shame. Plus it’s not the happiest of songs and that will be its downfall. But I quite like this despite its shortcomings.

The Voice: That live performance is a bit all over the place for me, it’s as if she’s struggling with it. Maybe it’s cause she’s sitting down for a good length of the song? Don’t know, the song is difficult enough as it is without her clawing through every note, so I’m crossing fingers for something more convincing in Tel Aviv.

The Performance: As if the song and the vocals aren’t fickle enough, that NF performance was really something WTF-ish. I like me a bit of armography, but it’s totally unrelated to the song so it’s just as if her arm is bewitched. Speaking of which/witch: I get what they’re trying to do but it feels like a middle school art project rather than a well-executed idea. The official video follows the same line of work, so I’m VERY apprehensive about what Tel Aviv will bring us…

WILL IT QUALIFY? This only won its NF thanks to the juries and I don’t even think the international ones will feel inclined to reward it…so I’m fearing for a second consecutive NQ for Romania.