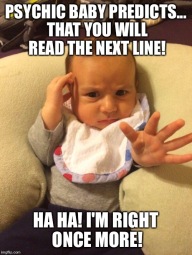 So… the dice are rolled, the scrutinizing is done – what’s the result now the dust has settled? Time for a round-up and some solid predictions.

We’ve not even started the battle of course. But we’ve come to the end of the preview road either way, so where are we now?

Let’s take a look at the current ranking (22/04) with the bookies for the overall win:

That top 5 seems sensible, even if I wouldn’t include Russia myself. Then again, that’s what I said in 2015 and look where that got me. This top 10 makes me think ‘seems logical’ and ‘no freaking way’ at the same time, which goes to show how evenly spread this year is in terms of song quality, bewildering concepts and impressive vocalists.

I’m personally head over heels in love with Iceland, but I don’t think it’s gonna win – might not even get top ten. *insert sad face* I’m not too sure about Norway either, and reading up on their possible stage plans isn’t exactly boosting that (lack of) confidence. When it comes to the triumvirate of SWI-CYP-MAL I have a hard time picturing all three of them in the top ten. It might be Switzerland that survives that mini battle. Greece could be too alternative in sound and concept to wauw the Eurovision audience and juries. And the more I think about Sweden, the more I’m doubting they’ll do as well as I predicted them to. But I am aware of the fact that I’m basically overthinking everything at this point. I do believe in a top three position for both Italy and Netherlands however, even if I haven’t got a clue what the right order could/might be.

Now let’s take a look at what you had to say over the course of the past posts. To construct this little list, I took a look at the top scores in stars and percentages (ex. top score of 5 stars, with 66% of the voters attributing that score). If those resulted in a tie, it was up to the following score (ex. 2 stars, 31% of the voters) to determine the order. Here’s your top ten:

The top two was very, very clear. They basically only racked up 5 and 4 stars from 81% & 75% of their voters. Greece convinced slightly less voters (66%) to give 4 or more. Slovenia surprised with 60%. All of the others had a top score of 4 stars. Only Norway had a follow-up score of 5 stars. The others had 3 in varying percentage, with Malta closing the top 10 with 2 stars as a follow-up score. I had to exclude the results for Portugal by the way, which were completely unbalanced and related to unusually high activity from within the Iberia region. I suppose I should be ‘honored’ that my wee little blog was selected for manipulated voting, but this kind of behavior shall not be tolerated. Anyway, quite surprised by Slovenia doing so well and the same goes for Czechia. Color me amazed. As expected, the most polarizing result is for Iceland, where voters for 1 and 5 stars are almost equal and make up for half of the votes. Estonia as well was quite polarizing, scoring 1 star as a top score, followed, by three stars. Your bottom five however consists of:

All of them got only 1 star from half of the voters, with Croatia getting the low score from 66% of the voting audience. No surprises here I think, and my thoughts on Israel possibly doing a Portugal 2018 is confirmed here – but still clouded by the fact that Germany  looks like they really want to claim last place in the final again.

Which brings me to The Dimivision Five, ie. the ones that could surprise and/or simply embody my wishful thinking:

If I had to pick a song that could surprise which doesn’t feature in any of the lists above, it would be Spain. Just because it could bring the Moldova 2017 fun factor into play.

Here’s what my final pre-Contest ranking looks like – feel free to share yours, of course! Thank you for reading, commenting and voting – it’s been quite the ride and the fun has only just begun! Not sure about your own top 41? Go to Mr Gerbear Eurovision 2019 Favorites Sorter and find out! Do come back in May for some more reviewing fun! 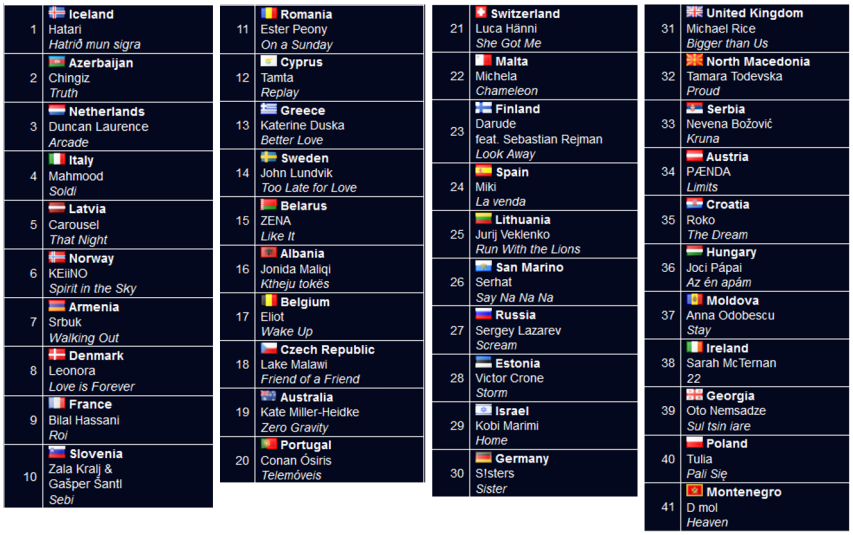